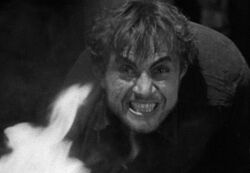 Fritz is Victor Frankenstein's hunchbacked assistant in the 1931 film Frankenstein. Fritz helped Dr. Frankenstein to acquire the bodies that was needed for his experiments. He was also responsible for getting the abnormal brain that went into the monster. Fritz was latter killed by the beast when he taunted it with a torch. His body was later found by Victor. Neither Fritz, nor any lab assistant, appear in the original Mary Shelley novel.

Dr. Frankenstein hired Fritz to assist him in his experiments on creating new life. He helped him dig up bodies and then would help transport them back to the castle where the experiments took place. He was tasked with acquiring a brain to be put into the body. During a lightning strike, he dropped the brain that was meant to go into the body and took a criminal's abnormal brain. During the experiment, Frankenstein's fiancee Elizabeth, friend Victor and older teacher Dr. Waldman arrived at the castle searching for him. Fritz attempted to make them leave but eventually had to let them in. He later helped Frankenstein lock his monster in the dungeon. While he was taunting the monster with a torch, it broke free and choked him to death and later hung him from the rafters. His body was later discovered by Dr. Frankenstein and Dr. Waldman. Frankenstein was brokenhearted by Fritz's death and briefly fell into a depression.

Dwight Frye's hunchbacked lab assistant in the first film of the Frankenstein series (1931) is the main source for the "Igor" of public imagination, though this character was actually named Fritz. Fritz did not originate from the Frankenstein novel, and instead originated from the earliest recorded play adaptation, Presumption; or, the Fate of Frankenstein, where he was played by Robert Keeley.[1][2]

Retrieved from "https://frankenstein.fandom.com/wiki/Fritz?oldid=4563"
Community content is available under CC-BY-SA unless otherwise noted.